Renato Guttuso had many talents: In addition to being a painter, he was also a stage designer, illustrator, art critic and – later – politician. Today, the self-taught artist is considered one of the most important representatives of Italian Realism, who actively opposed abstract tendencies in painting and therefore also achieved renown in the USSR. His work is characterized by the formal as well as thematic examination of historical and contemporary art trends. Pablo Picasso’s (1881-1973) Guernica can be considered an early example of this: in 1938, i.e. one year after the monumental painting was created, the young Guttuso received a postcard with the motif, which he carried with him at all times from then on. Guernica was regarded by him as a prime example of artistic resistance to the fascist politics of the time. Picasso painted Guernica for the Spanish pavilion at the 1938 Paris World’s Fair, depicting the destruction of Gernika during the Spanish Civil War, when the Basque city was attacked in April 1937 by Italian and German troops, allies of dictator Francisco Franco (1892-1975). For Guttuso, the translation of left-liberal political attitudes into visual art was a key moment that would henceforth shape his work. Shortly after the end of World War II, in 1945, Guttuso met Picasso in Paris, whereupon a lifelong friendship developed.

Picasso’s death in the spring of 1973 was thus a drastic experience for Guttuso: a few weeks later, as a form of coping with grief, Guttuso began a series that included more than twenty prints and ten paintings that can be understood as an homage to his fatherly friend Picasso. This includes Banchetto funebre (Convivio). Here, Guttuso recalls Picasso’s artistic achievements in the funeral banquet through the collage-like compilation of the most famous motifs. But the companions of the famous painter are also gathered around a table in order to emphasize their significance. Thus, the cropped depiction of the Guernica forms the background of the picture, whereby the sun of the Guernica, placed centrally at the upper edge of the picture in Guttuso’s work, serves as a ceiling lamp during the funeral banquet. Seated at the table is writer and patron Gertrude Stein (1874-1946), who was an early patron of the young Picasso. Guttuso paints Stein in his painting based on the portrait of Gertrude Stein that Picasso completed in 1906 after more than 80 sittings. Picasso’s second wife, Jacqueline Picasso (b. Roque, 1927-1986), is seated next to Stein. The two met in 1953 and married in 1961, and it was through Jacqueline that Picasso created over 400 portraits. She was largely responsible for his renewed interest in this genre of painting. To the left of Jacqueline, Picasso is depicted as an old man. Next to her is the artist Dora Maar (1907-1997), who belonged to the circle of Parisian Surrealists and was one of the most famous street photographers of the time. After Maar and Picasso met in Paris in 1936, the photographer was his muse and lover until 1943. She was responsible for the detailed photographic documentation of the process of creating Picasso’s Guernica. Maar also introduced the artist to left-wing intellectual circles, including the writer and poet André Breton (1896-1966). Sitting next to Maar is the poet Guillaume Apollinaire (1880-1918). The depiction in military uniform with a head bandage draws attention to Apollinaire’s 1916 wartime injury in the wake of the First World War. In addition to art theoretical discourses on Surrealism, of which the poet is the namesake, Picasso and Apollinaire were also connected by a criminal story that caused a sensation: in the summer of 1911, Leonardo’s Mona Lisa was stolen from the Musée du Louvre. The two friends were among the suspects because Apollinaire had sold Picasso stolen art objects from the Louvre a few years earlier, which now came to light. Both got away with it and the Mona Lisa was recovered in Florence in 1913. To the left of Apollinaire is given a female supine nude holding an apple in her hand, reminiscent of the biblical Eve. This is Marta Marzotto (1931-2016), Roman salonière, fashion designer and Guttuso’s muse for over twenty years.

Surrounding those seated at the table are Picasso’s most famous creatures, which in Guttuso’s Supper unite all of the master’s creative phases. These include La Vie, the most famous work from Picasso’s blue period, as well as Man with a Lamb, a detail from Les Demoiselle d’Avignon, and Le Taureau IV as a stand-in for the bull, one of the most frequent motifs in Picasso’s work, which he considered a symbol of pride and masculinity.

Guttuso is able to help the individual protagonists become recognizable through stereotypical modes of representation. At the same time, his composition remains as free as it is playful. What is certain is that he has created a biographical monument to his friend Picasso that is open to interpretation. 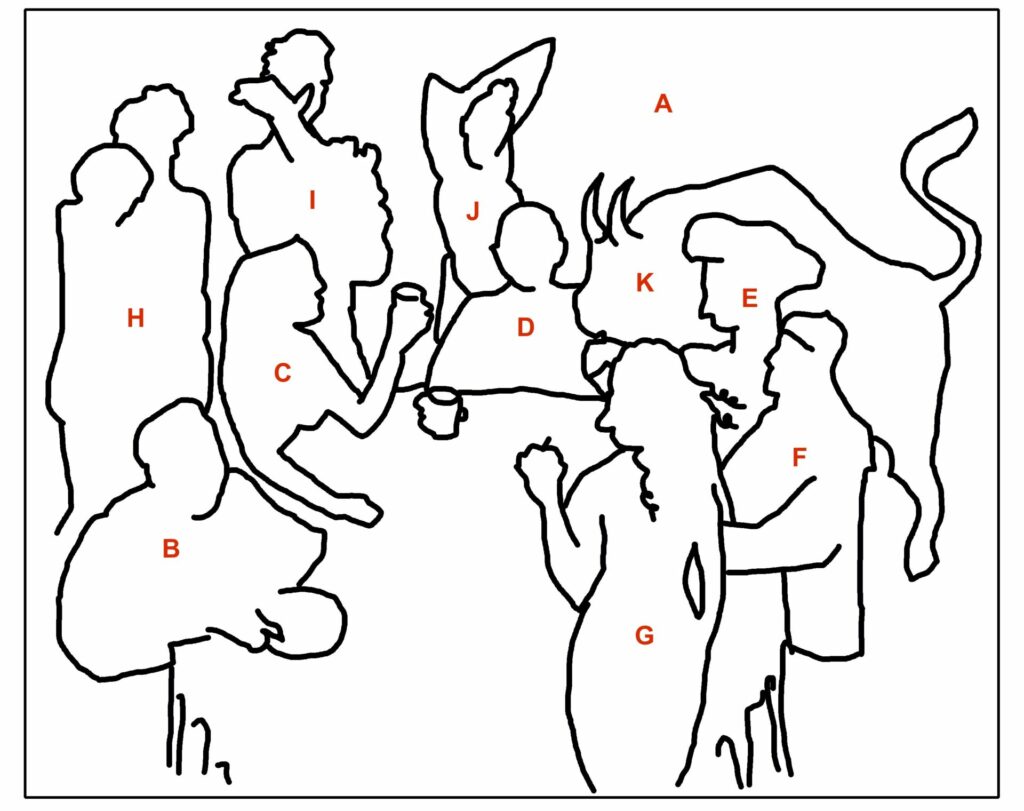